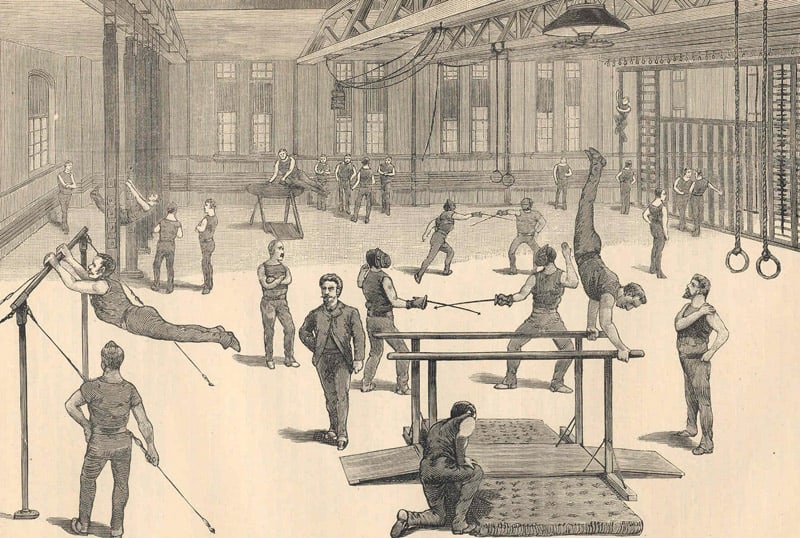 Gymnastics has existed for more than 2,000 years, but its development as a competitive sport began just little more than 100 years ago. During the 1800s, mass and individual exhibitions were conducted by various athletic and school clubs, as well as ethnic organizations, like the Turnvereins and Sokols.

Although slow to catch on in the schools, gymnastics did flourish in the Turnvereins and Sokols. It was introduced to the United States and its school systems in the 1830s by such immigrants as Charles Beck, Charles Follen and Francis Lieber.

The Bureau of the European Gymnastics Federation, which evolved into the International Gymnastics Federation (FIG), was formed in 1881, opening the way for international competition. In the United States, the Amateur Athletic Union assumed control of gymnastics, along with most other amateur sports, in 1883. Prior to this time gymnastics championships were held by various clubs and organizations.

The first international gymnastics competition outside of the Olympics was held in 1903 in Antwerp, Belgium, where gymnasts from Belgium, France, Luxembourg and the Netherlands competed in what is now considered the first World Championships. At St. Louis in 1904, the men’s team combined competition was added to the Olympic program. The U.S. men swept all three team medals.

At the ninth World Championships in 1930 at Luxembourg, the competition included the pole vault, broad jump, shot put, rope climb and a 100-meter sprint. Track and field did not fully disappear from the World Gymnastics Championships circuit until the 1954 competition.

At the 1924 Games in Paris, the basis of modern Olympic gymnastics competition was firmly established. The athletes (men) began to compete for individual Olympic titles on each apparatus, as well as in combined individual and team exercises. The 1928 Games witnessed the debut of the first women’s event, the team combined exercise, won by the Netherlands. The U.S. women first competed in the 1936 Olympic Games in Berlin, Germany.

Gymnastics is defined as physical exercises designed to develop and display strength, balance, and agility, especially those performed on or with specialized apparatus.

Most often, when people think of gymnastics, visions of the Olympic Games and elite competitors come to mind. Yes, this is gymnastics in its most advanced form – dynamic, beautiful, and thrilling.

Gymnastics as an Activity

Participants learn fundamental movement skills like running, jumping, landing, swinging, and rotating as well as developing all aspects of fitness including flexibility, muscle strength and endurance, balance, agility, coordination, and more. A start in the “activity” of gymnastics can easily lead to competitive success in gymnastics and other sports.

Gymnastics requires a certain level of formal training. It’s difficult and often unsafe to attempt many skills on your own without proper training.

Gymnastics has 1000s of Skills

Gymnastics, unlike other popular sports, has potentially thousands of skills to be mastered. It’s important that gymnasts only attempt the skills appropriate for their stage of development, experience, and ability.

It is impossible to compete in gymnastics until you have learned certain skills. In most sports, participant can compete right away because the prerequisite skills are minimal and rules can be modified for beginners.

In gymnastics a beginner attempts only beginner level skills, which differ significantly from the skills performed by advanced gymnasts. In other sports, like basketball, a beginner performs roughly the same skills as a professional (e.g., shooting, dribbling, and passing) with level of proficiency being the main difference between a beginner and a professional.

Gymnastics requires a relatively high degree of strength and flexibility to perform even basic skills. If students aren’t physically prepared, instruction must be modified for their limitations.

Gymnastics is Difficult to do Outside of a Gym

Because gymnastics requires specific apparatus and equipment, it’s difficult to do on your own or outside a formal gymnastics center.